Posted on May 27, 2015 by kingstonshakespeareseminar

Here is the recording of KiSSiT: Shakespeare and Waste plenaries as well as the finishing roundtable (it is also in our past events archive). The event was a great success: many thanks to all the speakers and the audience!

The first plenary is by Scott Wilson who is Professor of Media and Communication at Kingston University. His research interests include cultural & critical theory, particularly psychoanalysis and the legacy of Georges Bataille. His latest books include Stop Making Sense: Music from the Perspective of the Real (2015); The Order of Joy: Beyond the Cultural Politics of Enjoyment (2008); and Great Satan’s Rage: American Negativity and Rap/Metal in the Age of Supercapitalism (2008). With Fred Botting, he has co-edited The Bataille Reader and co-authored Bataille. He is also co-editor (with Michael Dillon) of the Journal for Cultural Research (Taylor & Francis). His talk is entitled ”Vile Jellies’: Bataille, Shakespeare and the Exhumanities’.

The second plenary is Peter J. Smith who is Reader in Renaissance literature at Nottingham Trent University. He is a Trustee of the British Shakespeare Association and Author of Between Two Stools: Scatology and its Representations in English Literature, Chaucer to Swift (2012)–which will soon be out in paperback–and Social Shakespeare: Aspects of Renaissance Dramaturgy and Contemporary Society (1995). He is on the editorial board of Shakespeare and Cahiers Élisabéthains.  He regularly reviews for Times Higher Education. The title of his paper is ”Rude Wind’: King Lear – Canonicity versus Physicality’. 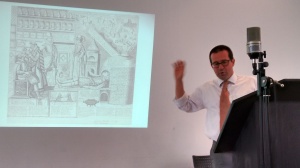 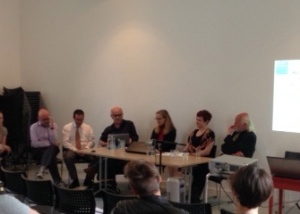 Stephen Unwin has directed over 50 professional theatre productions and 12 operas. In the early 1990s, he became Resident Director at the National Theatre Studio. He launched the English Touring Theatre in June 1993, and became the second Artistic Director (after Sir Peter Hall) of the Rose Theatre, Kingston. He was joint winner of the 2003 Sam Wanamaker Award with Barrie Rutter, and in autumn 2003 was Judith E. Wilson Visiting Fellow at Cambridge University. His books include So You Want to be A Theatre Director (Nick Hern Books 2004), and The Faber Pocket Guide to Shakespeare’s Plays co-authored with Kenneth McLeish (Faber and Faber 2007).

Ildiko Solti is an actor-director, researcher and teacher. She trained in Dramatic Arts at Macalester College, St Paul, MN, USA, then was Artistic Director of an English language theatre company, The Phoenix, in Budapest, Hungary, with whom she started experimenting with full light amphitheatre playing, and its effect on play composition and interpretation, as well as on actor training and the methodology of teaching drama. Having obtained her MA at Eotvos Lorand University in Budapest, Hungary, she taught drama, Shakespeare, theatre history and performance theory. Since 1999, when she moved to London to start a PhD in Shakespeare and the Globe Theatre at Middlesex University, she has carried on her work in teaching, research and experiment in performance, focusing on Elizabethan/Jacobean working theatre constructions through the method of research through practice in performance (PaR).

Andrew Jarvis has been an actor for 45 years. He was ten years with the RSC, five years with the ESC, and appeared many times in the West End and in two seasons at the National Theatre. Over the past twenty years he has also worked continuously in drama schools across the UK as a teacher and director, directing, among other Shakespearean plays, King Lear. He has been visiting professor of Shakespeare at Pepperdine University and Head of Postgraduate Performance Courses at Mountview Academy of Theatre Arts. He is a Board Member of the British Shakespeare Association, an Honorary Patron of Brownsea Open Air Theatre and the President of the Sunday Shakespeare Society.