Posted on October 30, 2015 by kingstonshakespeareseminar 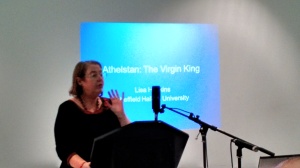 Lisa Hopkins‘ fantastic talk can be listened to here. She discussed the figure of Athelstan in Early modern drama, especially in Guy of Warwick by Samuel Rowlands, Old Fortunatus by Thomas Dekker, and The Welsh Embassador by Dekker, John Ford, and William Rowley. This is is part of her project on the Romans to the Normans on the Renaissance stage. Athelstan, for Hopkins, is a figure that explores the Early Modern idea of sovereignty and stands in for Alfred the Great, Elisabeth and James. Highly recommended listening. Hopkins’ talk brings Athelstan back home to Kingston, given a hundred yards away from the stone upon which Athelstan coronated in 925.

Lisa Hopkins is Professor of English at Sheffield Hallam University and co-editor of Shakespeare and of the Arden Early Modern Drama Guides. She writes mainly on Marlowe, Ford and Shakespeare, including ‘Hamlet Smokes Prince: 101 Reykjavik on Page and Screen’, ‘Adaptation 1’ (2008), 140–50, but nurtures a guilty passion for ‘Dracula’ and has also published ‘Bram Stoker: A Literary Life’ (Palgrave, 2007), ‘Screening the Gothic’ (University of Texas Press, 2005) and ‘Giants of the Past: Popular Fictions and the Idea of Evolution’ (Lewisburg: Bucknell University Press, 2004).